May 13, 2015
Martabak, i guess all people in Indonesia know this food. It's sort like a pancake but thicker and filling with any kind of taste e.g chocolate, cheese, peanuts, even nowadays there many custom filling we may found in this town. One of new taste i had couple days ago was Red Velvet Martabak.
First as you know basic taste of Martabak are chocolate and friends, but there also have green tea, ovomaltine, cadbury, toblerone and any kind of filling. Especially in this 2015 trend of foods become very inovated. Many old dishes having new kind of taste from cake, cookie, bread, pancake, muffin and many else.

So as i said, i had new taste of Martabak Red Velvet. The place is Martabakku. It's around the Menteng area, oops there's another martabak spot and first famous in those area. so you should check it on Google probably where is Martabakku. As i heard the place is just running around 2 months, at that time not so many customer seen. Actually they are not just selling Martabak, but there's some food stand selling foods like Kebab, and Asia Indonesia foods.

As what my purpose to go there was for martabak, so i was with two of my friends just craving the Red Velvet Martabak. we just order a regular size around Rp 75,000 and we got 10 slices in one order. 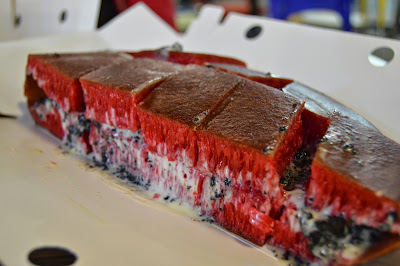 The order cames out and it is RED! colour looks so red yah, sure this is really new for me, as i remember martabak is like one of favourite meal since i was kid and now i may see Martabak in red colour and it is Red Velvet. Without any hesitate so we just grab our plate and starts to having our supper. 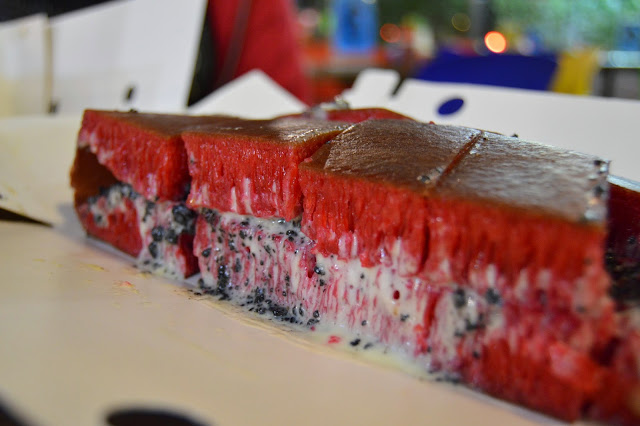 As you can see there s a white cream in it, i didn't ask what was that but i assume it is a fla for pudding usually. and another filling is poured oreo. after taste, for me i can't say it's great, the martabak texture is ok, i am not sure how is it taste Red Velvet, it's all because of the fla. What i can say is the fla doesn't suits the martabak. I guess it would be better if the fla replaced by ovomaltine or probably chocolate. It took quiet time for 3 of us to finished it, i am telling we were getting bit full after ate some slices.

For my last slice i even took off the fla  and just finished the Martabak :-D. well i can say this is not the worst experienced having a food, actually the Martabak is good if they just put better choice for filling. Cold fla won't be good i assume. for you culinary hunter, at least you should taste how is it and let see what you think about it. Red Velvet martabak, you won't find many place selling this in town nowadays :-)

June 30, 2017
Available in Bahasa: Click Here Michelin Starred Restaurant Award can be regarded as one of the highest and prestigious awards in the culinary world. Singapore, as one of the multi-cultural and ethnic countries, is the only country that gets a Michelin Award in Southeast Asia this time. This year became the second year for Singapore to get a Michelin Award. Michelin Guide Restaurant itself is divided into several categories. Ranging from Restaurants that chosen into the Michelin Guide Recommendation category, Bib Gourmand, and 1, 2 and 3 Michelin Starred Restaurant. By 2016, there are a total of 29 Michelin Starred divided into categories respectively. For the year 2017, emerging several new restaurants, so the total who won the award as many as 38 restaurants. Eleven names of new restaurants that are included in the 1 Michelin star are : 1. Braci at Boat Quay, 2.   Cheek by Jowl in Boon Tat Street, 3.   Chef Kang’s in Mackenzie Road, 4.   Garibaldi in Purvis Str
134 comments
Read more

July 18, 2017
Available in Bahasa:  Click Here Still about Bangkok, a tourist city with a huge number of tourists every year. Well, besides the many types of local culinary super cheap and delicious, in Bangkok we can also find a variety of unique and interesting themed cafes. One of them is Unicorn Cafe. Located in the downtown area making it within easy reach. This cafe is quite popular lately among the teenager and even foreign tourists. Built with a pink interior and unicorn ornaments that are one of the imaginary animal characters in the entire cafe. The space is not too broad, but visitors will still be pampered with a really unique cafe interior. Also equipped with brightly colored couches such as blue and pink, then the number of unicorn dolls with various sizes ready to accompany us. The menu offered also follows the concept presented. There are various desserts are beautiful and interesting, then cool drinks with tempting colors and do not miss also available some kind of sa
66 comments
Read more

January 15, 2018
Bahasa l English Christmas is one of those moments where we can enjoy an elegant special dinner. At Christmas 2017 last year, I had the opportunity to visit one Michelin restaurant in Bangkok, Thailand. Chim by Siam Wisdom earns 1 Michelin star with an authentic Thai food concept. From the outside the restaurant looks like a house with dark brown wooden elements. Customer will be escorted to the second floor with ample dining area, dominant local feel, many Thai ornaments around the room. Here, i met Chef Noom who is the owner and manager of this restaurant. At a special Christmas event, they present a set of 6 menus ranging from amuse bouche to dessert. In accordance with the concept of fine dining, here is also offered a variety of wine options to accompany dinner. Once you see the menu listed, there are many names of foods that will be served with more than 10 types of names. It turns out each dish will be served with several types of menus with a one-bite portion of it.
29 comments
Read more